The God Who Reverses Our Pain

Jesus gives a memorable parable in Luke 16 and it is striking that it is the only parable where a character is given a name.  Normally, Jesus’ parables included a simple description of a character, a Samaritan, a son, a father, a farmer, etc.  So, it is striking to read about “Lazarus” in Luke 16 and he appears opposite another unnamed character simply described as a “rich man.”

Later in the parable, both Lazarus and the rich man have reached their afterlife and they find themselves in opposite circumstances to each other and to what they were accustomed to in life.

The rich man is in torment and experiences an unquenchable thirst.  He looks across a gulf and sees Lazarus by Abraham’s side and begs for Lazarus to dip his finger in the water and be allowed to place it upon the rich man’s tongue.  Lazarus is not permitted to relieve the rich man because of the chasm between them, but also because their opposite circumstances reflect divine judgment.  Abraham tells the rich man, “remember that in your lifetime you received your good things, while Lazarus received bad things, but now he is comforted here and you are in agony.”

Lazarus had suffered greatly in life.  He was infested by sores on his body and had suffered such humiliation that even dogs licked his sores.  All of this is happening in full view of the rich man who enjoys his life of luxury without a second thought for Lazarus.  The message of Jesus’ parable is not hard to discern.  To ignore the suffering of others while indulging in luxury is a damnable offense.  If we will not take pity on others, then we will not experience pity in the life to come.

There’s another aspect of this parable, though, I believe is important.  It is concerning what God does for Lazarus.  Though it is a parable, there have always been a lot of Lazarus’ in the world.  Lazarus is someone who likely suffered from some kind of chronic condition, and in his world compromised health meant poverty, and poverty meant a life of begging.  And there may have been many times that Lazarus wondered if God cared about him and why God had allowed these things to happen to him.  God might have seemed disturbingly silent when he cried out to God for help.

And yet here is Lazarus at Abraham’s side being comforted for eternity.  Lazarus is enjoying a glorious new reality that far outweighs his suffering for the few years he was on earth.  Suffering is never easy.  Pain is still pain.  In the midst of it, it seems never-ending.  The story of Lazarus is a good reminder that pain is not eternal, at least, it doesn’t have to be.  God will remedy all that was wrong in our lives in the life to come.  God didn’t forget Lazarus even when everyone else did.  He knew his name and knows yours too. 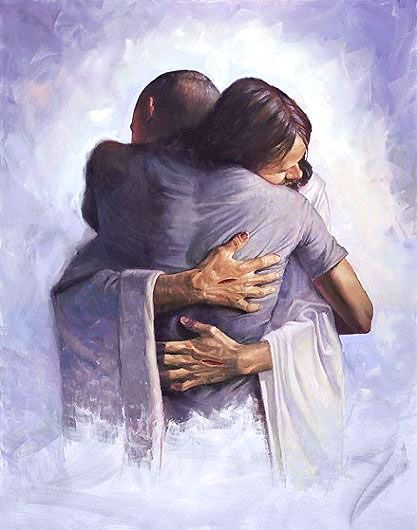 I don’t know what you believe about Jesus, but what I hope is that if you are a person that is suffering in this life due to chronic pain, illness, and other agonies, that you realize that there is a God who comforts.  We have a God who restores.  Even in this life, the one who suffered more than all (Jesus) will walk with you.  But let’s not forget that none of us have to suffer forever.  Our God reverses our plight and gives us a glory that will one day make us forget our pain.  As the apostle Paul once wrote, “For our light and momentary troubles are achieving for us an eternal glory that far outweighs them all” (2 Cor. 4:17).

I blog about topics related to the Christian faith and the struggle of chronic pain. I have ankylosing spondylitis and have dealt with chronic pain since 2011. I hope to provide support and community for those going along that same journey with me.
View all posts by David Heflin →
This entry was posted in Chronic Pain, Eschatology and tagged Chronic Pain, eternal life, Reversal of Fortune, Suffering and Faith. Bookmark the permalink.

Recovered from anorexia and battling chronic illness. Sharing my experiences and insights through writing

Navigating with Chronic Illness in a Self Absorbed World

Commissioned by Him
Into the Foolishness of God

The power of coming into agreement with God's Word and will

The Bible, suffering, and the messy edges of life

Connecting Hurting People to Jesus and Each Other

Han’s Blog!
The second time around

Life after an attempted suicide.

Encouragement on your journey with Jesus.

BY GRACE THROUGH FAITH

Chronic Pain with a Higher Perspective

Don’t give up. There can be hope in the midst of chronic pain. Create a new chronic pain perspective.